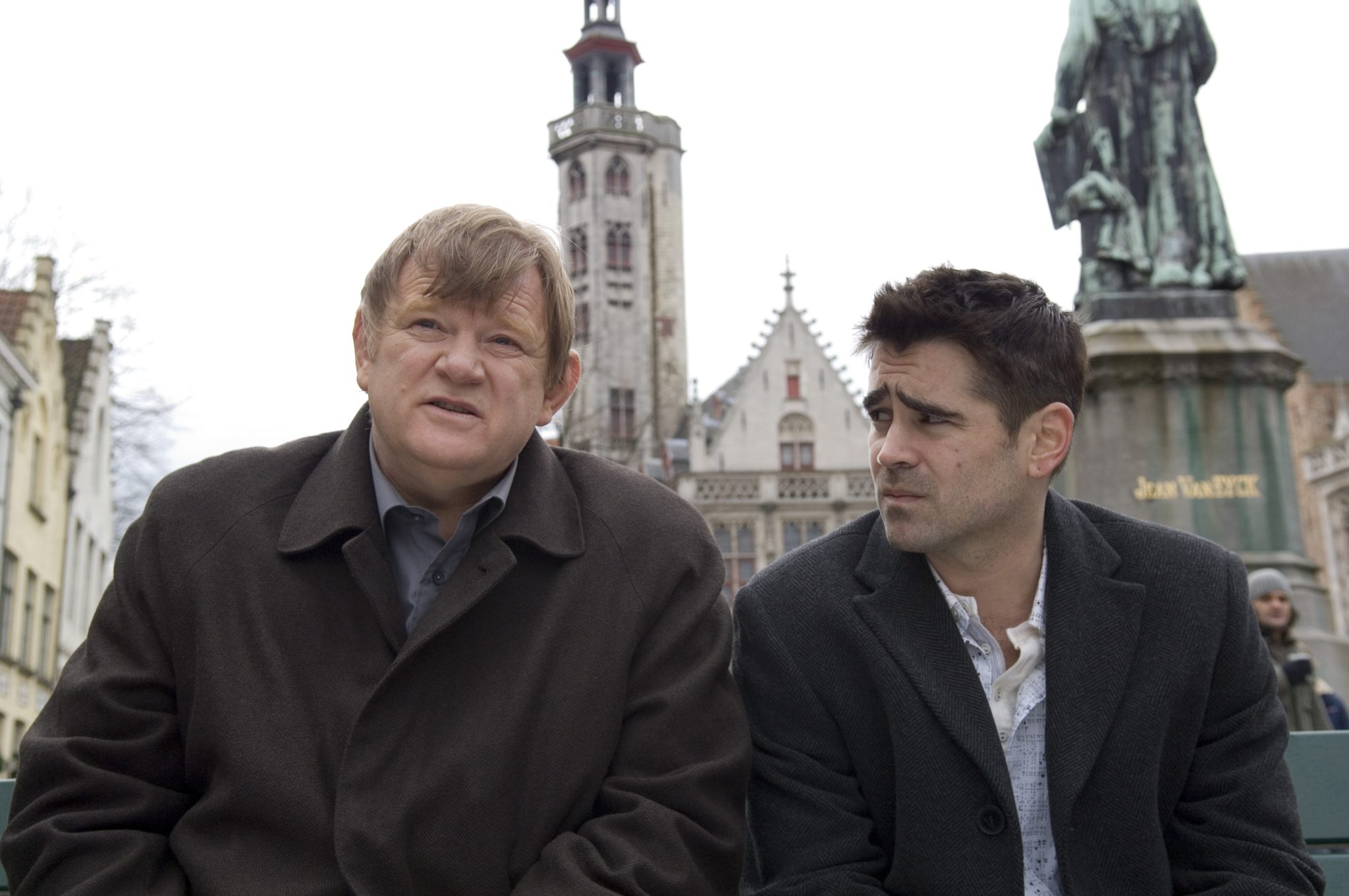 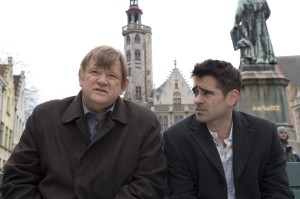 I blame Martin McDonagh for the changing of our travel plans at the last minute to include Bruges. If not for the In Bruges director’s lovingly shot sequence taken from a riverboat gliding beside the moss-blanketed canal walls and passing under bridge after pretty bridge we wouldn’t be here. My wife and I are on a mission to recreate the travelogue of the award winning movie and follow in the footsteps of the protagonists, hit-men in hiding, Ray (Colin Farrell) and Ken (Brendan Gleeson). 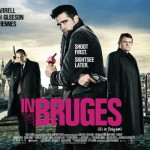 The plot of the movie has the two likable contract killers cooling their heels for two weeks in Bruges by order of their London mobster boss Harry (Ralph Fiennes). Ken, verging on retirement, embraces the chance to sightsee and slavishly follows the guide books, determined to see as much of the Flemish city as possible. Ray is bored and remorseful; interested only in the beer and drug fuelled eccentric characters he meets, including beautiful Belgian drug dealer Chloe (Clemence Poesy).

Just as the two movie gangsters views on how to spend their time are poles apart, my wife and I also have differing opinions. Like In Bruges’ fatherly assassin Ken, I am content to explore, at a leisurely pace, the tranquil canals, medieval architecture and Flemish art museums of this well-preserved World Heritage listed city. My beloved, however, is all go, go, go. She wants to pack as much into the weekend as humanly possible and learn all she can about the film stars, on screen and off.

Our first day in Bruges and we are greeted by the affable Bruges Tourism director, Jean-Pierre Drubbel, who adeptly manages to please us both. He knows all about In Bruges; he convinced the Burgomaster (local mayor) to allow the six weeks of location shooting that raked in 1.3 million euro for the picture-book municipality.

“I met people from the production house and they said we have a project we can only make in Bruges and if you say no we will cancel it but if you say yes it will be a very big enterprise.”

Jean-Pierre’s cheery face is framed by his frazzled Einstein hair and a wiry beard tainted by years of puffing cigarillos. Everyone knows and greets him. He insists we sample some salted shrimp at the Burg markets and then shows us a large wooden door at the edge of the square. Upon entering the Romanesque lower chapel of the Basilica of the Holy Blood our host shows us the diminutive Statue of Christ (which thousands of locals and tourists pay homage to every year) before proceeding to view the Holy Relic. The relic is a vial reputed to contain Christ’s blood from a cloth binding carried away from Jerusalem during the crusades – in the film it takes on a symbolic role of redemption for the troubled killers. 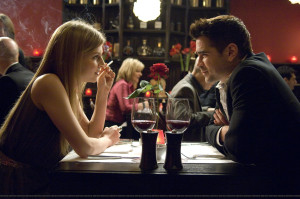 Everything is within walking distance in Bruges and Jean-Pierre is the perfect guide. One moment he is beguiling us with tales of Viking raids, the first Count of Flanders and a bustling trading outpost teeming with merchants, the next he is scurrying onto a small bridge, pointing to a bay window overlooking the canal.

“That window there is where Colin Farrell jumped into the water, which you see in the movie.” His lively eyes dance with devilish glee. “Ah yes, my friend Colin! He certainly enjoyed himself here. There was one international news story he was swimming naked with two women! If you believe the local stories he is supposed to have propositioned every woman he met including the hotel manager.”

Jean-Pierre recalls the welcome reception the day before filming began, meeting 120 people including director McDonagh, the technical crew and the actors – Colin Farrell was just a name and face in the crowd then.

“Everywhere he went there were giggling girls following him, at first I thought they were laughing at me,” he chuckles

A carillon of bells chime as we weave our way through the cyclists, horse-drawn carriages clip clopping on the cobblestones and the sightseers crowding the Markt, the city’s main square and site of the movie’s riveting climax. Towering overhead is the distinctive thirteenth-century belfry; its 366 steps too much for the obese American tourists in the movie who attempt to climb it despite Ray’s warning they shouldn’t because ‘you’re a bunch of elephants.’

Jean-Pierre points to the nearby Frietmuseum. One of the city’s oldest buildings is now a showcase for the humble Belgian potato.

“Not French Fries but Belgian Fries,” declares our host. “The American servicemen got it all wrong.”

Strolling along the narrow streets of archaic cottages we occasionally stop to gape at the boutiques of fine Belgium lace and lick our lips at the chocolate shops – lots and lots of chocolate shops.

“Ah, you must try the hot chocolate at this place,” says Jean-Pierre indicating the De Proverie tea room. “There are more than 120 chocolate businesses here in Bruges but I will only show you the very finest.”

Next stop is the Welcome Church of Our Lady to take in the obligatory viewing of Michelangelo’s ‘Madonna and Child’. The Hieronymus Bosch painting ‘Last Judgment’ which so impresses the gangsters is to be found at the Groeninge Museum, along with a superb collection of 15th to 20th century masterpieces by Flemish Primitives, Jan van Eyck and Hans Memling; a must for art lovers.

Night falls, the air chills and the cafes and shops hemming the Markt are awash in bright neon glory – a proclamation that the Cinderella land’s nightlife has begun. We try the mountainous clam and vegetable bouillabaisse at Cafedraal, the restaurant where Farrell’s character causes mayhem.

“Some of my friends went out with Colin during the film shoot,” our waiter Igor informs us. He says the crew totally transformed the restaurant for the film leaving it almost unrecognizable except for a distinctive painting on the wall.

After a full day of sightseeing we arrive back at our handy-to-everything hotel, the aptly named Romantic Pandhotel. It has a cosy fireside reading room and bar and sun-filled breakfast courtyard and is just a minute walk from the most photographed spot in Bruges, Rozenhoedkaai. Here you can board one of the many canal cruise boats. The still waters of this historic waterway softly reflect the night sky. It is stunning in the evening as it is in the day. We are also near to Den Dyver, where all the mains are either cooked in beer or complimented by one of Belgium’s many fine types of ale. The restaurant was, according to the manager, a favourite of In Bruges actor Jordan Prentice. “The little guy certainly knew how to enjoy himself like the criminals in the movie.”

The biggest crime would be not to spend enough time in Bruges. It’s easy enough to get here. We travelled by train from Berlin to Brussels and our Eurail Pass included the local train connections to Bruges. There are also up to ten daily Eurostar services from London to Brussels, the quickest under two hours.

Just as Ray and Ken’s lives are transformed by the fairytale city, yours will be too if you let the medieval Bruges work her magic. 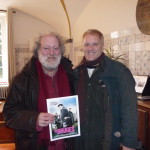